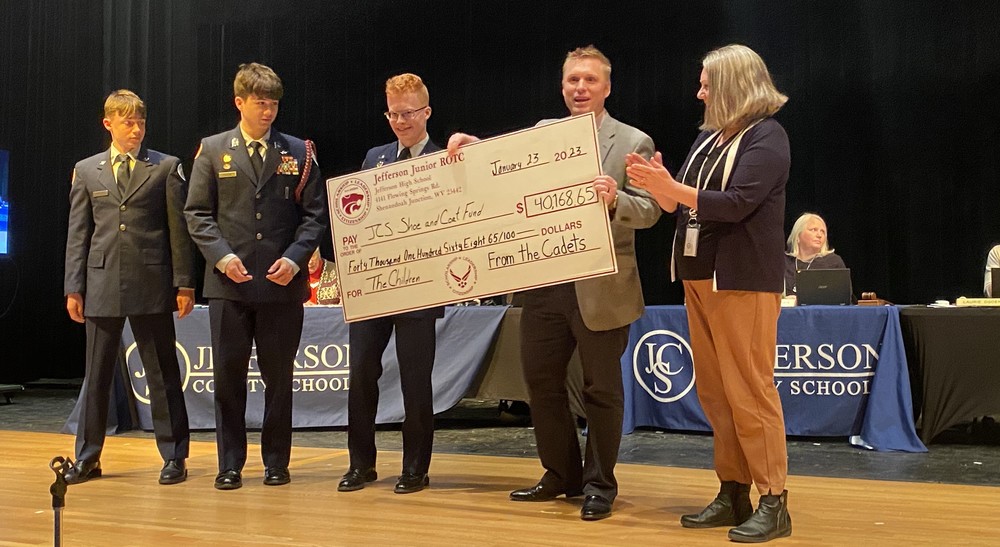 "All the cadets, they put in a lot of work. We scheduled time for cadets to be out collecting, but there’s also a lot of cadets who did stuff on their own.”

Cadet Major Sargeant Samuel Corum agreed, adding that the business community played a big role in getting them to their goal.

“A lot of businesses would let us put out tip jars or at least stand outside and collect money,” Corum said.

Cadet Airman First Class AJ Presley was the top individual earner, bringing in over $3,000 for the fund.

Jefferson County Schools Coordinator of At-Risk Educational Programs Alexander White accepted the check on behalf of the school system. He thanked the cadets and said their contribution will support kids in the community.

“Every single penny goes directly to the students and their families in Jefferson County. "

Administered through the JCS Social and Emotional Support Department (SoMo), JCS teachers originally established the fund in the 1980s to ensure that all students had access to winter-appropriate coats and footwear. It has grown to support hundreds of students each year, thanks to the generous support of the community. Additional information about the JCS Shoe & Coat Fund can be found at https://www.jcswv.org/page/jcs-shoe-coat-fund.